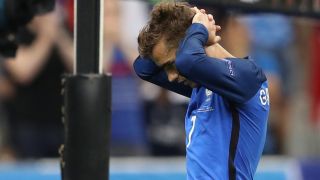 France star Antoine Griezmann lamented a lack of luck after his team's loss to Portugal in the Euro 2016 final.

A fine Eder strike in the second half of extra time lifted Portugal to an unlikely 1-0 victory in Sunday's decider in Paris.

Griezmann, who starred at the tournament with six goals to win the Golden Boot, had his chances, including putting a close-range header over the crossbar in the second half.

"We had chances," Griezmann told M6.

"A champion goalkeeper [Rui Patricio] has made saves. They did not have many chances, but they played well instantly.

"They scored 10 minutes from the end, it was complicated. It's frustrating, boring, but that's football.

"We must recover as soon as possible and prepare for World Cup qualifying. It was not our night. We had no luck.

"I am proud of this group and of course even if we did not win. On a personal level, this is my second final loss in a month [following the Champions League final against Real Madrid]. I'll come back stronger. This can only help me."