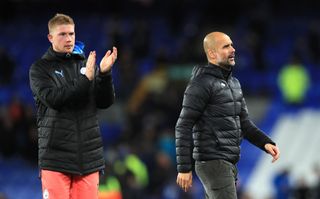 Pep Guardiola claimed his Manchester City side could not have afforded a slip up after grinding out a hard-fought win at Everton.

The Premier League champions needed goals in the final 19 minutes from Riyad Mahrez and Raheem Sterling to triumph 3-1 at Goodison Park.

Leaders Liverpool beat Sheffield United earlier in the day but City’s performance ensured the Reds would end the weekend as they started it, five points ahead.

Guardiola said: “We knew Liverpool won again and the gap was eight points – so big – so we won three points and it’s (a lead of) five in September, with a lot of points to play for.

“We know which team we’re playing (in the title race) right now, they are seven victories in a row, champions of Europe and playing good football. This is our rival and we know we can’t drop too many points because last season they lost just one game.

“The season is long, we have to keep going and be there, maybe we can push them a little bit more and try to make the third Premier League in a row.”

City took a first-half lead through Gabriel Jesus but Everton levelled through Dominic Calvert-Lewin, who got the final touch to a goalbound Seamus Coleman strike.

Both sides then had chances but ultimately it was City who prevailed as the outstanding Mahrez beat Jordan Pickford with a low free-kick and Sterling smashed in a shot off the bar.

Guardiola said: “At Goodison Park it’s always difficult. We started incredibly well as usual, we created chances and scored but after that we had a lot of problems.

“In the second half, except set-pieces and conceding free-kicks and long balls, we played good again. I had the feeling we had clear chances but Ederson made two incredible saves at 2-1. It was a good game of football.”

Everton’s evening started badly as they lost Theo Walcott to a concussion injury in the opening minutes after he took a Sterling cross flush in the head. He was taken to hospital but was discharged after precautionary scans and was back in the dressing room before the end of the game.

Manager Marco Silva said: “He needed a scan but he is OK. We will now talk more with the doctor.”

He said: “The most important thing is we fought well. Even though we didn’t get the result we wanted we took some positives from the game.

“We didn’t start the game like we wanted to start to. They started strong – faster than us, more aggressive with the ball. Until the first goal they scored they were better than us.

“After that we reacted and showed a desire to challenge them to try to get a different result. The reaction was good. We equalised and after that the game was more balanced.

“They scored that free-kick and after that we created two big chances to equalise. Unfortunately we didn’t score and they were more clinical than us. We deserved more from this game than we got.”