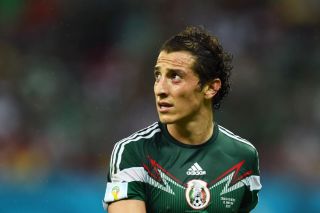 The left-sided midfielder played in all four of his country's games at this year's World Cup as they reached the round of 16 before an agonising last-gasp defeat to Netherlands.

Guardado, who took his tally of caps to 108 in Brazil, signed for Valencia in May 2012 after five years with Deportivo La Coruna.

After making 44 appearances in his debut season at the Mestalla, his first-team chances dried up last term and he spent the second half of the campaign on loan at Bayer Leverkusen.

The 27-year-old joins Luuk de Jong as the Eindhoven club's only other major foray into the market in the transfer window so far.

"I am very pleased and looking forward to a great season," he told the club's official website.

"I want to play for prizes, this is a great club and I hope to be able to be successful here."

Guardado becomes the third Mexican to ply his trade at the Philips Stadion after Carlos Salcido and Maza Rodriguez.

PSV have enjoyed a stunning start to 2014-15 under Phillip Cocu, winning all six of their competitive fixtures so far, including a 3-1 success away at champions Ajax at the weekend to underline their Eredivisie title credentials.