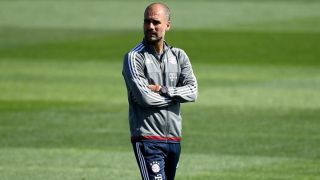 The Spaniard announced last month that he would leave the German champions at the end of the season to seek a move to the Premier League, prompting links to Manchester City and Manchester United, as well as Chelsea and to a lesser extent Arsenal.

Manuel Pellegrini has received little public assurance from City about his long-term future at the club and has commented that even winning the Premier League title might not be enough to save him.

Across town Louis van Gaal has been under constant pressure this season with Manchester United struggling for consistency in the league and out of the Champions League already.

Chelsea are actively looking for a permanent replacement for Jose Mourinho for next season, with Guus Hiddink taking temporary control of the Premier League champions.

Guardiola said he was sorry for the pressure his announcement had placed on his fellow managers.

"I am sorry," said Guardiola.

"Normally in my career as a trainer and as a player, I respect my colleagues a lot. So I am sorry. It wasn't my intention.

"I will reveal my new club once I have actually signed a contract."