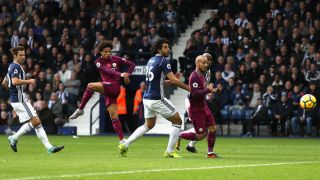 Pep Guardiola hailed Leroy Sane as "a special talent" after he helped Manchester City to a 3-2 win at West Brom.

The Germany international opened the scoring and set up Fernandinho's strike either side of Jay Rodriguez's goal for the home side, all of which occurred within the first 15 minutes at The Hawthorns.

The 21-year-old has registered six goals and five assists in his last seven Premier League appearances for City, whose win put them five points clear of United at the top once more, with Jose Mourinho's side having earlier beaten Tottenham 1-0.

Guardiola says Sane still has lots of room for improvement but feels he is showing the way forward for all City's midfielders and wide players.

"He's a guy who has a special talent, who runs in behind," he told BBC Sport. "It's important for our midfield players to do that.

"He's still young, there are many, many things he can improve."

The win looked closer on the scoreline that it should have been, with Ederson's misjudgement allowing Rodriguez to score and Nicolas Otamendi's careless chest back to the goalkeeper giving Matt Phillips an injury-time consolation.

Guardiola was happy his players did not lose their focus after gifting unnecessary goals to the opposition.

"We won, that is the most important thing. We did not panic at 1-1 or 3-2 at the last minute. We played a good performance," said the City manager.

"We conceded just three chances and then you see how many we created, clear, clear chances, and you score just three goals, always you have regret. But that's football.

"We did it in a difficult stadium. I'm so, so pleased.

"They played five at the back with two strikers. Normally, they don't play like this. Of course, he knows his players and they know exactly what they have to do.

"We started well again. Our games away, we always start good. We can improve when we win, so that's good."