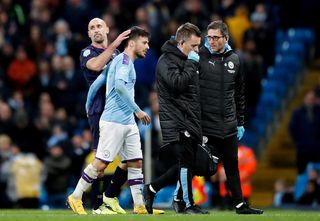 Pep Guardiola is hopeful David Silva will be fit for next week’s Champions League match against Real Madrid after the playmaker hobbled off during Manchester City’s 2-0 win over West Ham on Wednesday.

Silva came off in the closing stages after a strong challenge from Angelo Ogbonna in the penalty area but Guardiola does not think the problem is serious.

“He told me that he felt something,” Guardiola said. “But I don’t think it was a big issue.

“I will know (on Thursday) exactly. He played really well and we will see in the next days.

“He told me he had more caution after what happened near the goal. We will see with the doctors.”

Next Wednesday’s round of 16 clash at the Bernabeu has taken on added focus in the wake of UEFA handing City a two-year ban from European football for “serious breaches” of Financial Fair Play regulations, potentially meaning this is Guardiola’s last chance to win the Champions League with City.

Raheem Sterling is already an injury doubt for the trip as he recovers from a hamstring problem suffered at the start of the month, and the fixture clearly weighed on Guardiola’s team selection against West Ham as Fernandinho did not start a league game for the first time since September.

Instead Aymeric Laporte lined up alongside Nicolas Otamendi in defence, with the Frenchman playing only his second game – and first at home – since suffering a serious knee injury in August.

Happy with the win, clean sheet 🚪❌ & the goal (I think we all agree I touched it before it entered ?) 😂😂 #ThanksRodriForTheAssistpic.twitter.com/heMjgvuwfj— Aymeric Laporte (@Laporte) February 19, 2020

Relegation-threatened West Ham failed to pose City’s defence too many problems on the night, allowing Laporte a fairly straightforward evening, and his most notable contribution was almost nicking Rodri’s opening goal as he got a toe on the ball as it was crossing the line.

“I don’t know!” Laporte said when asked if it was his goal. “I’m not sure what happened but it’s OK for me, I’m happy with everything that happened.

“I’m happy with the result and being back on the pitch at the Etihad. The people here push me to do a good job.

“To be back playing at home, I’m happy with that. It was difficult for me being out of the team for this long time but I’m happy to be back with my team-mates.”

Defeat stretched West Ham’s winless run to seven games in total, six of them in the league, as they remain in the bottom three, one point behind Aston Villa in 17th.

David Moyes’ side rarely got out of their own half, managing just three shots – all off target – while City’s Rodri completed more passes than the entire Hammers side combined.

A trip to Anfield is up next and Moyes admitted he would not expect to get much out of the match, while insisting his side have the stomach for the relegation fight ahead of them.

“I think the players’ spirit is actually very good but everybody in here who talks football or writes football knows the difficulty of playing Manchester City away or Liverpool away,” he said.

“Everybody knows the majority of teams will find that very difficult to get something. Come the end of the season goal difference may be important but ultimately the way to stay up is to win games and we will have opportunities in other games.”