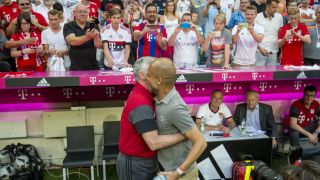 Bayern parted company with former AC Milan, Chelsea and Real Madrid boss Ancelotti on Thursday in the wake of a resounding 3-0 defeat at Paris Saint-Germain in the Champions League and amid claims relations had broken down between the experienced Italian and a number of his experienced squad members.

Guardiola won the Bundesliga in each of his three seasons at the Allianz Arena between 2013-14 and 2015-16, along with two DFB-Pokal triumphs, and Ancelotti made it five straight top-flight titles for Bayern last term.

However, a succession of unconvincing performances during pre-season spilled into the campaign-proper this time around and Bayern are currently off the pace in the Bundesliga, lying third – three points behind leaders Borussia Dortmund ahead of Sunday's trip to Hertha Berlin.

City are top of the Premier League table as they prepare to visit champions Chelsea on Saturday and, at a pre-match news conference, Guardiola was keen not to take sides when it came to events in Bavaria.

"I have a big appreciation for Carlo Ancelotti, also for Bayern Munich. When a manager is sacked from a team we are close to the other manager," he said.

"I am regretful. Where I am now is thanks to Bayern Munich. I am grateful to them for giving me the opportunity.

"And for Carlo Ancelotti, I wish him a lot of luck for the future."

Meanwhile, Guardiola joined Barcelona defender Gerard Pique in expressing support for the Catalan independence referendum, which is scheduled to take place this weekend amid mounting political tensions in his home region.

Spain's national government in Madrid has vowed to stop the poll, maintaining any vote would be unconstitutional.

"It would be a good outcome if we would be able to vote, like Pique said yesterday," said Guardiola, who pledged his support to the referendum publicly in June.

"If people can express peacefully and with freedom, hopefully it'll be a celebration of democracy."