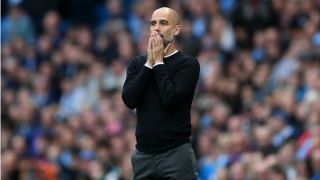 David Alaba admits former boss Pep Guardiola had a huge impact on his career during their time together at Bayern Munich.

Guardiola spent three hugely successful years at the Bundesliga giants, during which time Bayern were the dominant force in domestic football in Germany.

They won the league title in all three of his seasons at the helm, as well as picking up the DFB-Pokal twice, but the Champions League eluded the Spaniard during his spell in Bavaria.

Still, Alaba was full of praise for his old head coach, someone he believes is right up there with the best in the world.

"First of all, he meant a lot to me," the Bayern defender said. "He took me to another level.

"Under him, I knew I could play a lot of positions. He is one of the best coaches in the world, if not maybe the best from what I have seen.

"He bought a new style, not only in our team. We learned a lot about football and the style we played was great.

"We didn’t win the Champions League but we were very unlucky in that period. But the style we played was great."

Alaba is not surprised to see Guardiola continue to have success at Manchester City, who won the 2017-18 Premier League title at a canter.

"He's doing a great job, winning the title in England in a really good way," the Austria international continued. "You can see the work that he’s done over there."

Bayern wil come up against their former coach during a pre-season tour of the United States, as they face City in the International Champions Cup on July 29.

That fixture follows on from a clash with Juventus, who could have Cristiano Ronaldo in their line-up following his stunning switch from Real Madrid.

While acknowledging the Portuguese forward only strengthens the Serie A champions, Alaba's main focus is on helping Bayern succeed under new head coach Niko Kovac.

"This his decision and Juventus are a good team with good players when you add Ronaldo they will have a better team," he said.

"But I'm looking at my time and we will set our goals and we want to reach them."