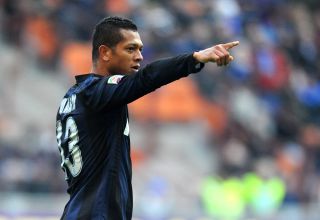 The Colombia international midfielder, who has also been linked with the likes of Tottenham and Galatasaray this month, insists that he does not want to leave San Siro and he is fully focussed on Inter.

And Guarin has voiced his frustration over his involvement in the Vucinic transfer saga.

"Inter, you put me up for sale without me ever saying to anyone that I wanted to leave, because I was comfortable and felt good at the club," the 27-year-old posted on his official Twitter account.

"I want clarity and respect for me, for the fans and for my agent. If I go away, the fans will always be in my heart because at Inter I have realised a dream and I have always received their respect and affection.

"If I stay, my strength will be put towards helping Inter to win."

Guarin initially moved to San Siro on loan from Porto in January 2012 before joining Inter permanently later that year.