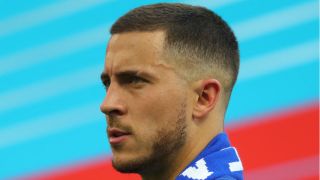 Eidur Gudjohnsen is worried Chelsea could lose Eden Hazard after failing to qualify for the Champions League.

The Blues won the Premier League title in 2016-17 but could only finish fifth last term, amid regular speculation regarding the future of head coach Antonio Conte.

The prospect of playing in the Europa League is unlikely to entice Belgium international Hazard, who has previously been touted as a potential target for Real Madrid.

Speaking to Omnisport courtesy of Nissan, official UEFA Champions League sponsor, Gudjohnsen was asked if he expects Hazard to stay at Stamford Bridge.

"I'm afraid, I'm afraid maybe not, but from what I understand he seems very happy.

"He wants to know where Chelsea are going, what direction, which coach is coming, whether Conte is staying or someone else.

"A lot will depend on how Chelsea present the future to him to convince him that he should be there for a long time.

"It's [been] a disappointing season.

"Even winning the FA Cup, which is a wonderful day for the fans, a trophy with a lot of history, but for Chelsea not to qualify for the Champions League or not be in the top four is always a disappointment. No matter how you look at it."

Should Conte, as expected, walk away from the club, Maurizio Sarri has been linked with the post, having departed Napoli at the end of a campaign spent challenging Juventus for the Scudetto, albeit unsuccessfully.

And Gudjohnsen knows his appointment would extend a tradition of productive working relationships between the west London club and exports from Serie A.

"Chelsea have always had a connection with Italian coaches," he said.

"You had Gianluca Vialli back in the day, [Claudio] Ranieri, [Carlo] Ancelotti, Conte now, another Italian in Sarri.

"The connection is there, so there is a possibility.

"Sarri has made amazing things [happen] at Napoli, I think he's taken them to a level that they haven't been for many years. But who knows?"