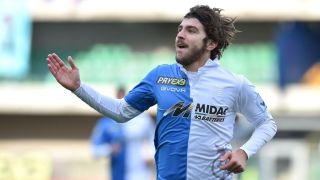 Swansea City head coach Francesco Guiodlin has confirmed talks are ongoing with Chievo's Alberto Paloschi and could be finalised over the next 48 hours.

Former Udinese coach Guidolin worked with Paloschi at Parma, while the 26-year-old striker also lists Milan and Genoa among his former clubs, having represented Italy at youth level.

Paloschi would be the first senior signing of Guidolin's tenure and the 60-year-old is confident the club will seal the deal.

"Alberto Paloschi was my player when we worked together at Parma," he said. "He was a promising young player, then he changed team and he is a good player, a good guy.

"He is important for us and I think he can help the team get results and score many, many goals I hope. I asked my chairman if it was a possibility, I like him.

"He is a model player and I think he can play well in the Premier League. He's strong, a good player.

"In this period, we are linked with many names and players, but at the moment I dont know. I'm hoping, if it's possible, to have another midfielder as well.

"But I don't know, at the moment there are many rumours and names, but at the moment Alberto Paloschi is coming, after medical tests, and I think he could be our player."

Guidolin was also quizzed about possible departures before the window shuts on Monday, notably Bafetimbi Gomis and Andre Ayew who have been linked with Newcastle United and Sunderland respectively in recent weeks.

"Gomis is our player at the moment," he added. "There are two or three more days of the window and I think he is an important player for us. He is one of my players.

"[The window] is a difficult moment for all teams and managers, it is not a good period for teams or players either. I am happy when it finishes in three days."