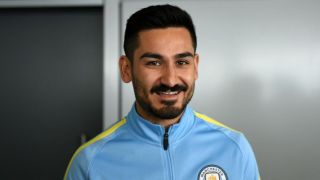 Ilkay Gundogan hopes to be fit enough to make his Manchester City debut by the time the derby clash with Manchester United comes around on September 10.

Gundogan completed a move to the Etihad Stadium from Borussia Dortmund last month for a fee reported to be in the region of £21million but is currently sidelined with a knee injury.

The Germany international will miss the start of the Premier League season but remains hopeful of keeping his period of inactivity to a minimum.

"Our target is end of August, September, and September 10 is the derby, so I could be ready for it, but it's difficult to say," he told Sky Sports.

"If it's one week earlier it's good, but one week later is also good. The important thing is to be safe and then everything else will come on its own.

"Watching games is not so easy but injuries belong to football, it's normal, so I am trying to take it easy and do my own work, and then help the team as soon as possible.

"Even when I got my injury, Pep [Guardiola] said it changed nothing for him and he still wanted me to join, so for me that was a big sign that I was doing the right thing."

Gundogan was presented to City fans along with new boss Guardiola on Sunday.

"He [Guardiola] was a big reason I joined," explained Gundogan. "I spoke to him a few times and he gave me such a good feeling.

"I know him from Germany and saw him in Barcelona. He's really impressive personalty and it's a big chance for me to work with him."