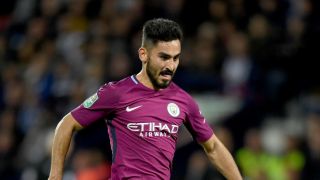 Manchester City midfielder Ilkay Gundogan concedes last season's pivotal defeat to Chelsea was tough to swallow as the two sides prepare to do battle again at Stamford Bridge on Saturday.

Premier League leaders City take on the champions having won their last seven games in all competitions and sit three point ahead of Antonio Conte's men at the summit.

Chelsea were the ones with a slender advantage when the sides met for the first time in 2016-17 and goals from Diego Costa, Willian and Eden Hazard allowed the Blues to strengthen their hand on the way to glory with a 3-1 win as City had Sergio Aguero and Fernandinho sent off during an ill-tempered finale.

Having led through a Gary Cahill own goal before Kevin De Bruyne hit the crossbar to spurn a glorious chance for 2-0, City's own challenge faded over the subsequent weeks.

"It was hard," Gundogan said. "We did a good job in the game and played quite well but Chelsea were just ruthless.

"They scored and punished us and we made too many mistakes. We want to do it better on Saturday.

"It's a huge game and it's away so it's even more difficult but we feel ready."

City themselves appear to have developed a ruthless streak this season, winning their previous three league games against Liverpool, Watford and Crystal Palace by an aggregate of 16-0.

A 2-0 Champions League triumph over Shakhtar Donetsk made it six clean sheets from nine matches since Pep Guardiola revamped his backline during the transfer window and Gundogan feels City's defence deserves due credit as attacking talents such as Aguero, De Bruyne and Leroy Sane hog the headlines.

Thanks for the special warm welcome at home Great to breathe some Champions League air again and a deserved win. September 27, 2017

"At the back, too, we have conceded few so our defence has also done a great job in the last weeks," said the Germany midfielder.

"It's a combination of both [attack and defence] and that's a really good recipe to win games.

"The last games showed it and against a really strong team [Shakhtar], especially in the second half, the performance was amazing. It's up to us to play our game and continue like that on Saturday.

"We need to be ready and show our mentality, especially in these games. It's a big game. We want to go there and play our best and hopefully win the game."

Guardiola's perfectionist tendencies are well documented and, despite lavishing his team with praise after they beat the Ukrainian champions on Tuesday, he often cut an animated and exasperated figure on the sidelines.

Nevertheless, Gundogan – back in contention after a cruciate knee ligament injury prematurely ended his debut campaign in England -  and his team-mates know they are on the right track.

"If you ask the manager there is always something to improve but we know that we are a great team, we have great players and it's just up to us to prove that every fourth day," he added.

"There are a lot of games and obviously Saturday is a huge game. It's also about character, going to Stamford Bridge against the champions to play our game.

"We're going to prove that we are ready for that and hopefully it will be a great game for us."