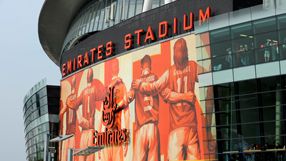 Full-back Vrsalijko has not just caught the eye of the Gunners but also of several of Europe’s elite clubs following a series of assured displays, and the 18-year-old is considered one of the brightest defensive prospects around.

Exciting young playmaker Kovacic recently became the youngest scorer in the history of Croatian top flight with a goal on his senior debut, and his huge potential has attracted the attention of Arsenal's arch-rivals Tottenham.

Dinamo vice-president Zdravko Mamic revealed that Arsenal sent a delegation to Zagreb earlier this month in an attempt to tie up a €20 million (£16.9 million) deal for the pair, but re-iterated that the Croatian champions have no intention of allowing their prized assets to join Arsene Wenger at Emirates Stadium.

"Ten days ago we had a special visit in Zagreb," Mamic told Sportski Zurnal.

"Here were people from Arsenal and they were ready to pay €20 million for Vrsaljko and Kovacic.

"But they are to stay in Dinamo, Arsenal just wanted to buy them for the future. My answer was sharp, I said 'no' in one second."

Mamic is under no illusions that the futures of Vrsalijko and Kovacic may ultimately lie elsewhere, but he is gambling on the duo’s values rising as they gain more experience in Dinamo’s first team.

"While I have space and no problems at our bank account I can take a risk," he continued.

"Yes, I know I'm playing with luck but so far I am winning. I believe it will be the same in the future."