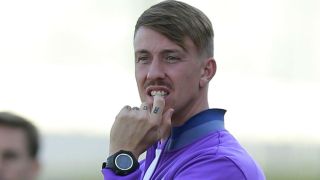 Zinedine Zidane has endorsed Guti's credentials as a future Real Madrid coach after the Spaniard admitted his ambition to occupy the Santiago Bernabeu hot seat.

Zidane has come under pressure this season, with Madrid 17 points adrift of LaLiga leaders Barcelona having also been eliminated from the Copa del Rey at the hands of Leganes.

Guti - a youth coach at the club - voiced his support for Zidane in a recent interview with El Chiringuito de Jugones but added: "How can I not want to coach Real Madrid one day?"

Zidane's future will be in serious doubt if Madrid cannot overcome Paris Saint-Germain in their Champions League last-16 tie - the first leg of which is on Wednesday - but he was happy to back his former team-mate to one day ascend to the top job.

"Yes, I see him [as being] capable," Zidane told a news conference.

"He is preparing himself to be a coach in the future and it could be at Real Madrid.

"He's in good shape, he's someone who is from this club, he's always been here and one day it will be his dream as well."