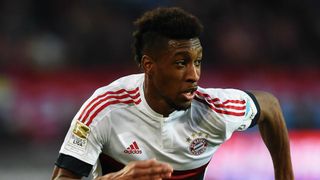 Kingsley Coman has urged Bayern Munich not to let standards slip in the second half of the season despite boasting a commanding lead at the top as the champions return to Bundesliga action at Hamburg on Friday.

Bayern are seeking a fourth consecutive Bundesliga title and are eight points ahead of nearest challengers Borussia Dortmund going into the trip to the Volksparkstadion.

The Bavarians will not be lacking motivation to clinch the Bundesliga as well as the DFB-Pokal and Champions League in what will be coach Pep Guardiola's final few months at the Allianz Arena.

Bayern announced Guardiola will depart at the end of the campaign last month, with the Spaniard widely expected to take up a managerial role in England. Carlo Ancelotti will take charge of Bayern next term.

Coman - who joined on a two-year loan deal from Juventus in August last year - told the Bundesliga's official website: "Here, I have the opportunity to win a lot of trophies, and first of all, the Bundesliga title.

"For me, it would be my third in a row after Italy with Juventus [2015] and France with PSG [2014]. We also want to win the DFB Pokal and the Champions League.

"We're hungry and we want the maximum.

"You have to take Borussia Dortmund seriously. It's good to be eight points ahead, but that can very quickly change. So we have to keep giving our all and try to win each game."

Bayern are still without Mario Gotze because of a thigh problem that has kept him on the sidelines since October.

Franck Ribery - who missed the majority of 2015 with an ankle injury - is unavailable with a thigh issue suffered in December and Medhi Benatia has not yet recovered from a muscle complaint.

Right-back Rafinha is likely to be absent with a severely bruised knee sustained in Bayern's 2-1 friendly loss to Karlsruher on Saturday.

After surviving relegation via a play-off with the third-placed 2. Bundesliga side in each of the last two seasons, Hamburg are enjoying a better campaign this time around, sitting 10th in the table.

Sven Schipplock (hip) and Ashton Gotz (groin) are back in full training for the hosts, but Emir Spahic has been ruled out because of an abdominal strain.

Striker Pierre-Michel Lasogga (shoulder) and midfielder Gideon Jung (back) are doubts and, with a seven-point gap between Hamburg and the relegation play-off place, coach Bruno Labbadia knows his players have plenty of work ahead.

He told their official website: "In our situation the second half of the season will be a major challenge for us. I have no fear, but everyone must realise that we must always play to our limit and remain tight as a group."

- Bayern claimed 46 points before the mid-season break – a tally which has only been bettered once. They accumulated 47 in Guardiola's maiden campaign in the job (2013-14).

- Bayern have lost their first fixture after the mid-season break in two of the last four seasons. The 4-1 loss in Wolfsburg last year was their heaviest league defeat under Guardiola.

- Hamburg have not won any of their last 14 competitive meetings with Bayern (D3, L11). Their last victory over Bayern came in September 2009 (1-0). Current boss Labbadia was also in charge on that occasion.

- Hamburg, like Bayern, let in just five first-half goals before the mid-season break – a league low. However, they have shipped 18 goals after the interval, six times as many as the Munich club (3).