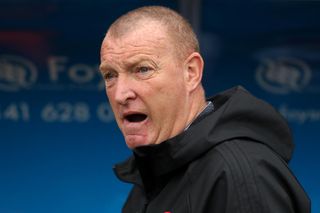 Hamilton manager Brian Rice will only make a move before the transfer deadline if the club’s injury crisis fails to clear.

The Accies boss currently has seven first-team players on his casualty list, although he is keeping his fingers crossed a couple make themselves available for Sunday’s visit of Ladbrokes Premiership leaders Celtic.

Rice has watched relegation rivals Hearts gamble on £150,000 signing Liam Boyce as well as Donis Avdijaj and Toby Sibbick in a bid to boost their fight for survival.

It paid off on Sunday as Daniel Stendel’s basement boys stunned Rangers at Tynecastle as they clawed themselves to within a point of Rice’s team.

But Rice says he will only splash out if he does not get the news he is hoping for from his medical team.

He said: “I’m hopeful I’ll get one or two of the injured players back for Sunday.

“I don’t want to give away any names yet as I’ll be disappointed if they don’t make it but we are hopeful.

“Hearts have brought in two players recently and if what I’ve read is right they have spent a bit of money doing so.

“You always try to do what you can for your club to get yourself out of the situation you’re in and that’s what Hearts are doing.

“Whether we sign anybody before the deadline very much depends on these injuries we have. We’ll need to see how they progress over the next day or two.

“We’ve got things on the back-burner but they will only happen if the injury situation doesn’t clear up.

“It would be nice if we could get another fresh face in. However, once we get all the injured players back it becomes quite a big squad so I don’t want to fill it up just for the sake of it.”

Accies looked set to frustrate the Neil Lennon’s champions at Celtic Park last month when Marios Ogkmpoe scored a 90th-minute equaliser – only to be left with heads in hands as Scott Brown raced up the park to grab the winner seconds later.

But Rice feels Hearts’ 2-1 win over Rangers can give his side belief.

He said: “Celtic are champions for a reason. They took a knock with the defeat to Rangers last month but have bounced back and are now top of the league again.

“That tells you all about their character. It will be very difficult but we need to have a game-plan that keeps us in the match long enough to give us a chance.

“We nearly got a result at Parkhead so we’ll go again this time. I’ve said previously that the gulf between the top two and the rest is massive – when they’re at it.

“Sunday showed what can happen when they come off it at bit. So it’s down to what happens on the day and we need to go with the belief that we can get something from the game.”