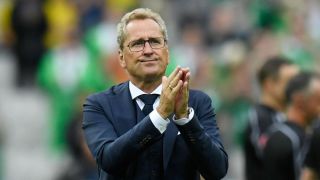 Erik Hamren described his side's attacking performance as "not good enough" after a Ciaran Clark own-goal earned Sweden a 1-1 draw with Republic of Ireland.

Wes Hoolahan's strike just after half-time gave Ireland a deserved lead but Sweden fought their way back into the game before Clark's error levelled the scores.

Hamren admitted his side were second best for much of the game, particularly when going forward.

"Sometimes you just don't get it to work right away," he said. "Credit to Ireland, they really showed up and we didn't react properly

"We don't have a problem with our focus. Our attitude has been really good. We had a proper attitude.

"The attack wasn't good enough. We were too immobile and we weren't really moving around properly.

"We also talked about being better at winning second balls. Ireland did well, they scored and they had a shot that hit the crossbar."

With Italy and Belgium next up for Sweden in Group E at Euro 2016, Hamren played down his side's chances of progressing having failed to capitalise against the side they were widely tipped to have the best chance of beating.

He said: "The feeling right now is disappointment rather than satisfaction at coming back for a draw. We have to be at 300 per cent in the other two games if we are going to go through.

"The first 50 minutes were very good from Ireland. They are really good in the physical game.

"Our attack was bad in the first half. We talked a lot about counter-attacks and switches of play but there are four passes until we are able to get to the final third and they closed us down.

"After they scored we stared to play better, possibly because Ireland went back. We started to switch the play with one or two touches and Martin Olsson was creating a lot.

"It is disappointing that we were not able to play at the level that we are capable of doing in the first 50 minutes."

Zlatan Ibrahimovic failed to register a shot on goal during the game, despite being one goal away from becoming the first player to score in four consecutive European Championship finals, but Hamren defended the striker.

"To be a forward, you need support," said Hamren. "Our attacking play wasn't very good. In the first 50 minutes our forwards didn't have much to work with.

"As a team we got better after and they had some opportunities. He [Ibrahimovic] was involved in the goal we scored.

"They defended against him really well [in the] first 50 minutes. When we were not passing the ball well, we were supposed to be able to pass it better.

"Ireland did well protecting their areas and made us work for it. We didn't go up to the level that I expected."