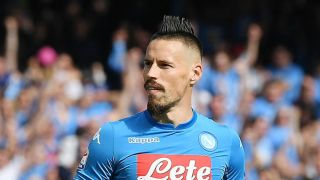 Marek Hamsik struck his 100th Serie A goal but Napoli's Scudetto hopes faded with a 2-2 home draw against Torino.

Leaders Juventus moved seven points clear of Maurizio Sarri's side with a 3-1 comeback win at home to Bologna on Saturday.

Napoli therefore had to avoid defeat to keep the title race alive, with Hamsik thumping in a first-time strike within two minutes of his introduction as a second-half substitute to give his team a 2-1 lead.

But Lorenzo De Silvestri fired Torino level with seven minutes to go, meaning only an extraordinary last two rounds of the Serie A season could now see Juve denied a seventh straight Scudetto.

Hamsik reached 100 Serie A goals in 394 appearances for the Partenopei, who are seeking a first Serie A title since 1989-90.

The Slovakia international is already the record goalscorer in Napoli history, having surpassed the great Diego Maradona, whose goals fired the club to the Scudetto twice.