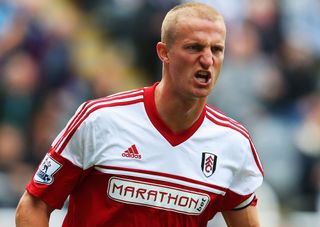 Fulham went five games without a win after their opening-day victory over Sunderland, a run that saw the London club drop into the bottom three of the Premier League.

Victory over Stoke City before the international break saw Fulham edge out of the relegation places, but with only seven points from seven games, Hangeland knows Jol's side need to improve quickly.

"I am not particularly pleased (with the points total)," he told Norwegian newspaper Dagbladet. "That statistic doesn't impress anyone.

"We've got work to do - we have had a fairly tough programme, but one point on average per match is worse than we had planned.

"It is still early in the season. We should not get stressed, but we are hoping to get more in the future and advance in the standings.

Fulham will travel to Crystal Palace on Monday hoping to record a second away win of the campaign.