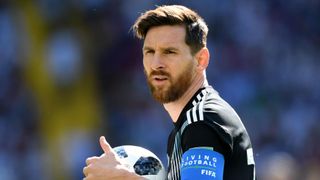 Barcelona superstar Lionel Messi celebrates his 31st birthday on Sunday, another milestone for the record breaker.

Since making his Barca debut aged 17 Messi has been the scourge of defenders in Spain and across the globe.

In the process the forward has collected 31 trophies but international honours with Argentina still elude him, something that seems unlikely to change with their World Cup hopes hanging by a thread.

To celebrate Messi's birthday, we take a look at 10 of his best goals throughout a sensational career that still has plenty more to come.

Even at 17, Messi had the confidence of a veteran. Having already had one goal wrongly ruled out for offside - an audacious chip from the edge of the box - Messi's confidence was far from knocked and just a minute later he latched onto Ronaldinho's pass before lobbing the ball over Albacete stopper Raul Valbuena from 16 yards. Some way to open your account for a club.

Messi had already scored two equalisers in this match, but when Sergio Ramos headed home with 15 minutes left, it looked like Real Madrid would see the game out. Enter Messi. The forward controlled Ronaldinho's pass on the edge of the box, left Ivan Helguera in a heap on the ground, and fired past Iker Casillas into the corner to complete his first treble.

In the 12 years since he first got on the scoresheet, only one of Messi's strikes was ever going to top this list: his Diego Maradona-esque solo goal against Getafe. Messi picked up the ball in his own half and danced around two players before turning on the pace, beating two more defenders and going around the goalkeeper, capping it with a right foot finish.

Described by some as 'a defining goal' in his career Messi's strike against Real Zaragoza seemed to take him from very good into another class entirely. Messi displayed all he had to offer in this goal, which began when he won the ball from a tackle on halfway. From there, he shrugged off one challenge, raced towards the box and turned a defender inside out before drilling the ball into the far corner - leaving Pep Guardiola speechless.

If any of the years Messi has been playing can be defined as "his year" it was 2012, when he seemed to break every record under the sun. The one that set a Guinness World Record was his second against Real Betis in December - the 86th goal of the calendar year for the Argentine. It was a typically Messi goal, too, as he slammed home first time into the far corner from Andres Iniesta's lay-off to surpass Gerd Muller's record of 85 goals in a year.

Prior to the 2014 World Cup, Messi had only scored one goal in eight appearances. Seemingly determined to step up for Argentina, he netted in his side's opening match before going on to score one of the goals of the tournament in the second against Iran. With the score at 0-0 heading into stoppage time, Messi took control of the ball and bent a powerful strike past the despairing arms of Alireza Haghighi to break Iranian hearts.

Having already opened the scoring three minutes earlier to give Barca a 1-0 advantage over Bayern Munich in the Champions League semi-final, Messi doubled his tally with a sumptuous effort. Ivan Rakitic's pass sent Messi on his way, before the little maestro's trickery put Jerome Boateng on his backside and allowed the Argentine to casually lift the ball over the onrushing Manuel Neuer.

The second part of a treble-winning season for Barca came in the form of the Copa del Rey against Athletic Bilbao. With 20 minutes gone and the score deadlocked, Messi set off on a marauding run down the right wing and soon found himself trapped amongst three defenders. Naturally, Messi was able to float past the trio as if they were not there, before cutting into the box and beating Iago Herrerin at his near post.

El Clasico rarely disappoints for football fans around the globe, and the latest edition was no different. Anything but a win would essentially hand Real Madrid the title, and it looked to be headed for a 2-2 draw until Sergi Roberto's swashbuckling run in the 92nd minute gave Jordi Alba the chance to square it to Messi, who finished with aplomb from the edge of the area for his 500th Barcelona goal.

Argentina were on to the third coach of their qualifying campaign and went into their final match in the altitude of Quito needing a win to guarantee a place at the 2018 World Cup. The unimaginable looked like happening when Renato Ibarra put Ecuador 1-0 up inside 38 seconds, but Messi came to the rescue. After firing home twice inside eight first-half minutes, the Argentina captain skipped past Robert Arboleda and chipped Maximo Banguera from 18 yards to complete his hat-trick and send his team to Russia.