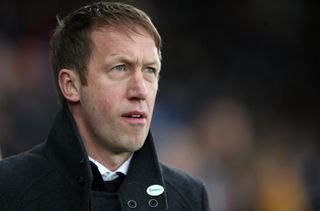 Graham Potter recognises that “a bit of fortune” helped him on his way to landing a job in the Premier League, having spent only one year coaching in English football.

The 44-year-old was confirmed as Chris Hughton’s successor at Brighton on Monday – his birthday – and, as things stand, he is set to be one of only five Englishmen managing in the top flight.

Potter led Swansea to 10th in the Sky Bet Championship last season, having previously worked with Ostersund in Sweden, where he achieved three promotions and reached the last 32 in the Europa League.

The latest step on an unfamiliar career path sees him take up his new job at a time when it is widely felt positions in the Premier League are harder than ever for English managers to secure.

“You always need a bit of fortune in life,” he said. “I’ve also worked very hard to get to this point. My unflattering football (playing) career came to an end at the age of 30, so I had to embark on a coaching career and try to learn how to be a better coach every day.

“You look at my path that I’ve taken to get to this point; it’s 14 years of quite a lot of hard work and sacrifice and learning and mistakes and development, but I’m very proud to be here now and I’ll do my best to carry on improving and to help this football club reach its goals.

“It’s not easy. I don’t expect it to be. I expect it to be really tough. But that’s why you take it on. That’s why I was impressed with what the guys here were talking about; good people who understand the process.

“I started off on my journey realising I wasn’t very good at coaching and wanting to get better. I’ve taken the steps quite unconventionally, but now I’m here and I’ll do my best to understand the responsibility and the challenge. I’ll do everything I can to deliver.”

Potter’s appointment on a four-year contract is Dan Ashworth’s first since his appointment as technical director.

“The Premier League is a tough, unforgiving league, but one Graham is fully aware of,” said Ashworth.

“(He’ll know the league from) following it from Sweden, playing Europa League games and playing Manchester City in the FA Cup at Swansea. So it’s not a totally alien league.”