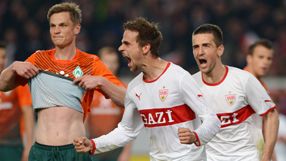 Three goals in 16 minutes, including two from Austria international Martin Harnik, sank eighth-placed Werder who could now miss out on European football for the second consecutive season.

Stuttgart, who have gone nine games without defeat, are five points ahead of Bayer Leverkusen and Hannover 96. Fifth position at the end of the campaign would earn a spot in the Europa League.

"I am usually more reserved but tonight I have to say that it was a really super match we played," Stuttgart coach Bruno Labbadia told reporters.

"We put them under pressure from the start. It is a very satisfactory feeling for a coach."

Injury-hit Werder, missing eight players, took the lead when Markus Rosenberg connected with a Marko Marin cross from the right after 25 minutes.

It did not take long for the hosts to level, Christian Gentner curling an unstoppable 20-metre shot past goalkeeper Tim Wiese in the 37th.

Stuttgart top scorer Harnik headed in from close range on the stroke of half-time before adding his 17th league goal of the season from a Tamas Hajnal cross eight minutes after the restart.

Substitute Cacau sealed the win a minute from time, heading in after being left unmarked in the box.

"That second goal just before the break was unnecessary," said Werder coach Thomas Schaaf. "It became very difficult after that.

"Stuttgart were brimming with confidence and we were far too timid."