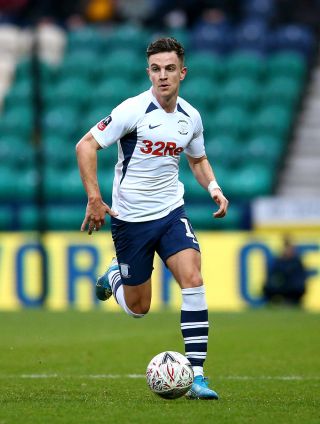 The former Manchester United forward struck in the 17th minute – his second goal in as many games – to cancel out Adam Armstrong’s close-range finish in the third minute for his eighth of the season.

It was all set for a grandstand finish that never came in a desperately disappointing second half. The closest either side came to grabbing a winner was when Declan Rudd left Armstrong’s cross, only to see it hit the woodwork.

The draw does neither side any good in the pursuit for a top-six finish; both are now five without a league win.

Ryan Nyambe returned from injury as part of five Blackburn alterations, while Ben Davies, Harrop and Joe Rafferty were the only survivors from Preston’s FA Cup defeat to Norwich.

Rovers hit the front in the third minute but Preston had themselves to blame as Tom Clarke’s poor pass was cut out and allowed Armstrong to burst into the box.

He appeared to have lost control of the ball but the visiting defence made a mess of clearing and the in-form forward pounced to slot home his third in his last five outings.

His snapshot almost doubled the lead but the Lilywhites regrouped and notched a spectacular equaliser in the 17th minute when Paul Gallagher’s free-kick was nodded back by Patrick Bauer into the path of the onrushing Harrop who rifled an unstoppable effort into the roof of the net.

But the hosts finished the half strongly, as Rudd produced a flying save to keep Lewis Holtby’s shot out of the top corner, and the German also whistled one just over in first-half stoppage time.

There was still enough time for Armstrong to miss a great opportunity, firing wide of the far post when profiting from a quick free-kick.

It took until the 71st minute for a chance of any note in a second half short of quality, but former Blackburn man Gallagher curled his 25-yard set-piece wide.

Moments later, a long punt almost put Sean Maguire through after a slip by Amari’i Bell but the left-back reacted admirably, blocking the shot.

At the other end, Armstrong’s teasing inswinging cross was left to go wide by Rudd, only for the ball to hit the post, and the goalkeeper grabbed the rebound four minutes from time.

Rudd made amends in stoppage time though, clawing away Tosin Adarabioyo’s acrobatic flick to preserve the point.