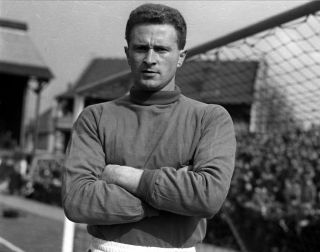 Harry Gregg was happy to be remembered as many things – footballer, goalkeeper, Manchester United player, Northern Ireland international and grassroots champion among them – but was always ill at ease with the title ‘hero’.

That he was deserving of the description brooks no argument, by any definition of the word. His actions during the Munich air disaster, twice returning to the burning fuselage to drag team-mates and strangers to safety, were the epitomy of bravery and selflessness.

Had a 25-year-old Gregg not been on the BEA Flight 609 on February 6, 1958, or not survived the ill-fated take-off, the shocking death toll of 23 would have been higher still.

It was Gregg who sought out and delivered to safety a 20-month old baby, Gregg who returned for her badly injured, pregnant mother and Gregg who dragged Bobby Charlton and Dennis Viollet from the wreckage by their waistbands, not knowing if they were dead or alive.

The courage of Gregg, who has died at the age of 87, has been formally hailed in Germany and in Serbia – home to the rescued Lukic family – not to mention at Old Trafford, back home in Ulster and in countless thousands of conversations with the man himself.

It has been recreated in film and retold via documentary, passed down through generations in the telling of one of football’s darkest days.

But he never embraced or amplified his own valour, and wrote in his autobiography Harry’s Game: “Munich established my identity, of that there is no doubt. (But) the notoriety has come at a price, for Munich has cast a shadow over my life which I found difficult to dispel.”

Tragedy revisited three years later when his first wife Mavis died of cancer, and once more when daughter Karen was claimed by the disease in 2009.

Gregg had once been a devout Protestant, visiting churches on Sundays wherever football took him, including Catholic services if that was all he could find, and even consulted a minister when the question of representing Northern Ireland arose.

His faith eventually buckled, but he bore the burdens of his life stoically, and even though a stroke in 2013 ended his favourite beach-front jogs, he remained active in the community through his eponymous charitable foundation.

He was also left in no doubt about how revered his name remained during his latter years, a fact that left him unashamedly proud. When Northern Ireland’s Windsor Park was officially reopened following development in 2016, he was afforded a warm on-pitch ovation by the fans as well as meeting boxing champion Carl Frampton and golfer Rory McIlroy, both of whom treated him as the true star in the room.

Gregg, who was awarded an OBE in the 2019 New Year Honours, leaves behind five children, including four with second wife Carolyn, and an unimpeachable legacy.

Gregg was born in Tobermore, South Derry, on October 25, 1932, the eldest of six children.

As a teenager he combined a carpentry apprenticeship with stints at Linfield’s reserve team and Coleraine, a club so local he lived within a decent goal-kick of the Showgrounds stadium.

Football beat woodcraft with ease and by 18 he had been snapped up by Doncaster, where he enjoyed five good years before becoming the world’s most expensive keeper when United, and Matt Busby, shelled out £23,000.

He spent nine years with the Red Devils and, although he never won a medal with the club, injury having ruled him out of the 1963 FA Cup final and restricted his appearances in two title-winning campaigns, an unforgettable career was forged. Not many people can say they had their boots cleaned by a young George Best.

Gregg remains a touchstone for United goalkeepers, a dominant leader between the posts and a revered shot stopper. In all he played 247 times for United, including, incredibly, a 3-0 win over Sheffield Wednesday just 13 days after the Munich tragedy.

Of those who had been on duty in Belgrade before the fatal crash, only Gregg and Bill Foulkes wore the jersey in that emotional fixture less than two weeks later.

He eventually left Old Trafford for the briefest of stopovers at Stoke and a underwhelming managerial career followed, with spells in charge of Shrewsbury, Swansea, Crewe and Carlisle.

That his United career ended without a testimonial was an anomaly of circumstance, finally righted in 2012 when Sir Alex Ferguson proudly brought a full-strength squad to Windsor Park to face an Irish League XI.

In his programme notes the Scot labelled Gregg “beyond legendary” and “a most reluctant hero”. That word again.

He may have bridled at the terminology, but he earned it on a footballing level too, never more so than to Northern Irish football fans at the 1958 World Cup.

In other eras, Gregg might have been expected to take the summer for reflection and recuperation after the trauma of the previous months. Instead he lined up in his country’s first ever World Cup and was later named the best keeper in the competition.

His stellar performance against West Germany, in particular, was a remarkable showing that left opposition striker Uwe Seeler likening Gregg to a “springing panther”.

It is Seeler’s description that Gregg would most readily have recognised: athlete, competitor, opponent. For the rest of the world he was that, but more, an incredible embodiment of human spirit in adversity. A hero.