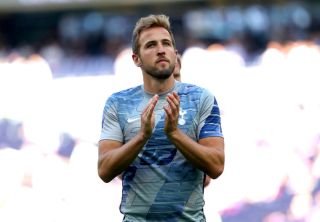 Tottenham striker Harry Kane feels his side are not learning from their mistakes and that manager Mauricio Pochettino is right to be frustrated.

Spurs opened up their Champions League campaign by blowing a two-goal lead at Olympiacos in a game that ended 2-2.

They saw off a torrid opening in a hostile atmosphere in Athens to take control through a Kane penalty and a thumping Lucas Moura goal.

But Olympiacos, who have only lost once at home since last September, got one back through Daniel Podence on the stroke of half-time before Mathieu Valbuena’s penalty completed the comeback.

It was terrible game management from Tottenham, who also squandered a two-goal lead at Arsenal at the beginning of the month.

Kane insists there is no excuse for their errors, which are the same as in the early days of Pochettino’s spell.

“That’s the hard part to get your head around because we’re not young any more, we’re not inexperienced,” the England captain, who scored his 15th Champions League goal in 20 games, said.

“We’ve played in a big games for club and country.

“I can see why the manager is frustrated because he’s been here for six years now and we’re still making similar mistakes to the ones we were in his first year.

“We’ve got to find a way to get around it, improve and get better. That’s all we can try to do.”

The draw means that they can ill-afford to lose against Bayern Munich in their next game in a fortnight – unless they want to give themselves another mission impossible to qualify.

Last year they took a point from their opening three games, which left them a mountain to climb.

They were determined not to put themselves in that position again, which is why Kane is frustrated not to have got the win.

“It’s hard. We’ve been here before,” he said. “It’s disappointing because we started last year’s campaign disappointingly, and we know it takes a lot of hard work and energy to get back to the top of the group.

“We obviously play Bayern, a very tough opponent, next.

“That’s the frustrating part. 2-0 up if we see it through to half-time it’s probably a different game.

“That’s something we’ve got to work on and improve on.

“I don’t doubt the mentality of the team. We’ve come through a lot in the last few years and last year reaching the Champions League final after being down and out in the group.

“A bit more maturity in those situations will help.

“We’re still backing ourselves to win enough games and get through the group but obviously it makes the game in a couple of weeks important to win to get ourselves in a better position.”