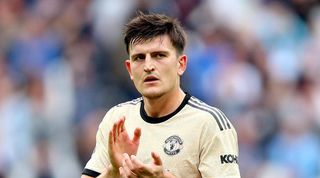 Harry Maguire says it is "really special" to be named Manchester United club captain following the departure of Ashley Young.

The centre-back has worn the armband on several occasions this season but says it is an "honour" to be handed the role on a full-time basis.

"It's a really proud moment for myself and I'm really honoured to be captain of this great club. I've worn the armband previous but to be named captain is really special," he told Sky Sports ahead of United's crunch clash with Liverpool on Sunday.

"He [Solskjaer] pulled me to one side and told me that if Ashley leaves, I'd be appointed as the next captain.

"He wished me well and told me to keep doing what I'm doing. I was really proud, it's such an honour to play for this club, let alone captain it.

"It's fairly new because I've never actually been appointed club captain, but I've had some great captains in my time. Michael Dawson at Hull, Wes Morgan at Leicester and then Youngy here. I've learnt from some great people who do stuff well off the pitch."

"Leading by example and being responsible for your team's actions on and off the pitch," Maguire added when asked what it takes to be a successful skipper.

"I've had some great captains to look to and learn from and hopefully I can take that and bring it to the club here.

"I've been here for five or six months now but it shows great trust from the manager and great confidence in my ability to lead the boys on and off the pitch and I have confidence in the ability to be a success.

"First and foremost, you've got to go onto the pitch and lead by example. Then you have responsibilities off the pitch and in the dressing room. As I've got older with more experience, I've developed more speaking in my game whereas when I was a young boy, I was quite quiet.

"I always looked up to the experienced boys there and seeing how they handled themselves and it's something I've improved as I've got older."