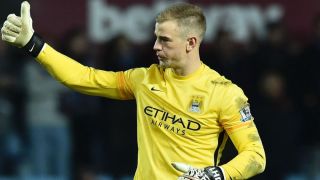 Goalkeeper Joe Hart did not feel Manchester City deserved to win after they twice came from behind to claim a 2-2 Premier League draw at West Ham.

Hart was forced to pick the ball out of his own net inside the first minute as Enner Valencia capitalised on slack City defending to fire home.

Sergio Aguero drew a foul from Carl Jenkinson in the area and converted a ninth-minute penalty himself, before the same goalscorers traded second-half strikes – the Argentina star's second leveller coming nine minutes from time.

Aguero had a chance to steal the points in injury time and Cheikhou Kouyate headed against Hart's bar in the final act of a pulsating encounter.

"I thought it was a brilliant game," the England international told BBC Sport.

"They played football. It was great the way Enner Valencia was attacking.

"Sergio Aguero is a killer - even though he is not at the standard he says is his best, he's still scoring.

As the first-half wound down, Hart made an exceptional save to touch Dimtri Payet's free-kick out of the top corner and the keeper conceded it was a moment he savoured.

"That save did feel good from Payet," he added. "I had to move my feet quickly. It was a great game of football."