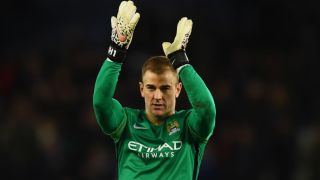 Manchester City goalkeeper Joe Hart believes his side's last-ditch comeback victory over Watford sent out a warning to the rest of the Premier League.

The England international was beaten after 55 minutes at Vicarage Road on Saturday, as Aleksandar Kolarov put through his own net to give Watford the lead.

However, two quickfire late goals - in the 82nd and 84th minutes, from Yaya Toure and Sergio Aguero - gave City reward for their persistence as they turned the game on its head to win 2-1.

The result hinted at the character within the City squad, who moved back to within three points of leaders Arsenal at the top of the table.

And asked after the match whether such a fight back was a sign that they could go all the way and recapture the title they last won in 2013-14, Hart was bullish.

"We believe that and we want to make it happen," he told Sky Sports.

"Everyone is going to do their own season and no one is really going to care what I say, but that today is a big moment for us.

"It [the way they came back] can only be a good thing - but we have to build on this now.

"We are in a good place and are utilising the strength in our squad. We are not where we want to be yet, but we are close."

Victory ended City's poor recent record on the road, with Manuel Pellegrini's side having failed to win in their previous six away games in the Premier League.

But Hart insisted he was never overly concerned when they fell behind to Kolarov's own goal 10 minutes into the second half.

"The Stoke game [a 2-0 defeat on December 5] and games like that give you a bad feeling.

"Once we had conceded I was just watching and hoping we could do it and get back into the game, and thankfully we did."