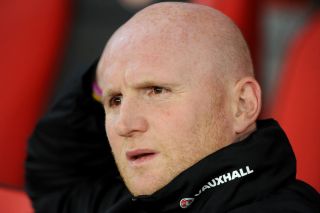 The former Celtic striker left his role as part of Coleman's backroom staff on Wednesday, citing family and work commitments, having occupied the position for the duration of the 2014 FIFA World Cup qualifying campaign.

Welsh football's governing body are adamant Hartson's resignation has nothing to do with reports linking manager Coleman with the vacant Crystal Palace job.

"He spends a lot more time away now that he's a pundit with the BBC," an FAW spokesman told Perform. "His wife's expecting a child, so he doesn't feel he can commit to spending 10 days with Wales all the time.

"It's something that's been on his mind for a while. It's got nothing at all to do with all the speculation surrounding Chris.

Senior figures at the FAW maintain that there is no reason to believe Coleman will vacate his role in the near future, despite his contract being set to run out at the end of November.

"As far as we're concerned, it's business as usual," added the spokesman. "There's no contact from Crystal Palace, and he'll be in charge for the Finland game (on November 16)."

Hartson had earlier told the FAW website: “I have enjoyed every moment of my time with Wales. Everyone knows how passionate I am about my country.

"I have learnt a lot working with Chris, Kit (Symons) and Osian (Roberts)."