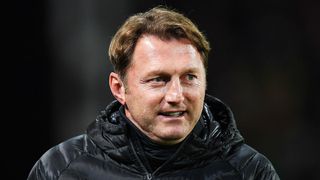 RB Leipzig coach Ralph Hasenhuttl has acknowledged they could be in danger of losing players such as Naby Keita and Emil Forsberg in 2018 if they fail to qualify for Europe next season.

Hasenhuttl's men were the revelation of the 2016-17 campaign as they clinched second place in the table in their first season in the Bundesliga to qualify for the Champions League.

Good performances have not gone unnoticed elsewhere and both Keita and Forsberg have been linked with a number of clubs, including Liverpool.

Leipzig stated this week they have no intention of selling any key players, but Hasenhuttl realises they might have no other option next year if they fail to build on this term's success.

"If we do not qualify for European football again next season, it is going to be harder for us to hold on to players like Keita and Forsberg," Hasenhuttl told Bild.

"We are very aware of that. We cannot let it happen that the Champions League games have a negative impact on our Bundesliga duties.

"We are judged on our performances in the Bundesliga. And it will perhaps not be as easy again because the euphory of that first season is gone now."

Hasenhuttl then went on to admit Rani Khedira and Davie Selke could be on their way out during the close-season.

"I have a good relationship with Selke. But other options have worked out better for us."