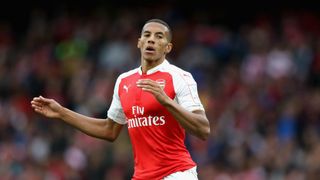 Arsene Wenger feels Isaac Hayden would have wasted his career had he stayed at Arsenal and is adamant the 21-year-old made the right decision to leave the Emirates for Newcastle United.

Hayden impressed on loan at Hull City last campaign, but did not play a role in Wenger's plans for the future and was thus allowed to join Newcastle.

The Arsenal boss has now explained his decision to sell the young defender and believes it was in Hayden's best interests to leave.

"He couldn't get the chance here and I decided to let him go and have an opportunity," Wenger told Arsenal Player.

"He's very intelligent and very good physically as well, he has good strength.

"I remember some games he played, like at West Brom in the League Cup where he did extremely well, and I gave him a chance to go up to Hull. It went quite well, they liked him and they wanted to buy him as well.

"I think Newcastle are a good opportunity for him."