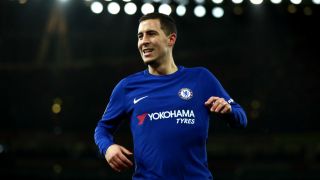 Eden Hazard felt Chelsea created enough chances to win their meeting with Arsenal and was frustrated to leave the Emirates Stadium with a 2-2 draw.

Hector Bellerin's 92nd-minute strike rescued a point for the Gunners in a pulsating derby clash on Wednesday, after Chelsea had come from behind to lead 2-1.

Jack Wilshere broke the deadlock midway through the second half before Hazard's penalty and a Marcos Alonso goal looked to have secured the win for the visitors with six minutes remaining, only for Bellerin to equalise with a brilliant half-volley.

Goalkeepers Petr Cech and Thibaut Courtois made some fine saves in an engrossing contest but Chelsea arguably had the better opportunities, with Alvaro Morata missing three one-on-ones and Davide Zappacosta rattling the crossbar in the dying seconds.

Hazard admitted it was a disappointing outcome for the visitors, telling Sky Sports: "Chelsea should have won this game, because of the chances.

"It was 50-50, both teams played a really good game. Maybe we should have scored more goals – we missed a lot of chances.

"I think the last shot [from Zappacosta] should be a goal and, just before, Alvaro missed a chance. Petr did a great job today. He's a great goalkeeper and it's always hard to score against him."

4 - Arsenal have conceded a joint-high 4 penalty goals in the Premier League this season (level with Watford and West Ham). Spotted. January 3, 2018

Bellerin was pleased with Arsenal's reaction to falling behind but felt they should have done better to keep their initial lead, with Hazard equalising four minutes after Wilshere's strike.

"It was non-stop," said the full-back. "It's always a hard game when we play them, always a lot of entertainment, always really hard.

"It was disappointing because we should have held the score at the beginning but it was a great reaction.

"We had so many chances in the first half but it was a great game of football."

Bellerin conceded the penalty by kicking the sole of Hazard's boot as both players stretched for a loose ball, but the Spain international would not say if he felt referee Anthony Taylor made the wrong decision.

"He's very quick in the box, I saw the ball in the air and we both went for it at the same time," he said. "The ref thought it was a pen."

Hazard was less equivocal in his assessment, adding: "We don't need a replay – it was a penalty."