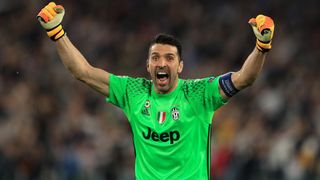 Buffon, 39, is aiming to win Europe's top club competition for the first time when Juve face Madrid in the decider in Cardiff on Saturday.

Ramos hailed the veteran goalkeeper, an eight-time Serie A winner, as one of the greats.

"Buffon is a legend and he will be remembered as one of the best goalkeepers in the history of football," he said on Tuesday.

"He is an example for anyone who wants to live and experience this sport and he has shown that age has been no barrier."

Madrid are eyeing back-to-back Champions League crowns and a record 12th title when the teams meet at the Principality Stadium.

Ramos believes the balance in Zinedine Zidane's squad has helped them to success this season, including winning LaLiga.

"For me it's an honour that Zidane says I represent Madrid's values," the 31-year-old said.

"Every one of us here brings something different: some experience, some youth, some balance, some goals… we all give what we can.

"That mix is the key to our success and we have a good atmosphere and a really good harmony."