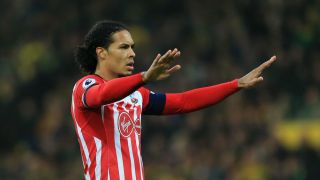 Virgil van Dijk is not worth £60million and there are questions over whether he can deliver at a top club like Liverpool, according to Steve Nicol.

Liverpool continue to be linked with the defender despite claiming earlier this month to have dropped their interest in him, when the Reds apologised to Southampton for "any misunderstanding" surrounding their pursuit, following an alleged illegal approach.

Nicol, a five-time league winner at Anfield, insisted a move will still happen if his former club can find common ground on a fee with Saints, although he is concerned by reports that such a sum could prove to be as much as £60m.

"If the price is right, then yes," Nicol said to ESPN when asked if the transfer for the Netherlands international could still happen.

"He is a good player, the question is can he deliver at Liverpool? He did it at Southampton, can he do it at one of the big boys? I don't know."

Nicol believes that Liverpool's apology has to be the end of the matter, with no further action taken by the authorities.

"I'm not going to argue that it's not unethical, but it's about as common as muck.

"It happens every single time there's a transfer, somebody gets tapped up. Everybody knows it but everybody turns a blind eye to it.

"If the FA or anybody else want to go after Liverpool or any other club for this type of behaviour, you're going to be very busy because they're all at it."