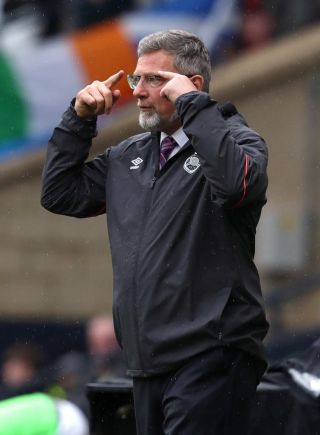 Craig Levein has vowed to stay composed ahead of basement club Hearts’ crunch clash with Edinburgh rivals Hibernian on Sunday.

Pressure has been mounting on Levein following his side’s disappointing start to the season which has seen them pick up just two points from their opening five Ladbrokes Premiership games.

That poor run of results leaves Hearts bottom of the table as they prepare for a huge trip to neighbours Hibs, who are just two points better off after losing their last two games.

Levein said he remains in regular contact with owner Ann Budge but insists he is well aware of the situation Hearts find themselves in and believes he is capable of turning things around at Tynecastle.

He told Sky Sports: “We talk nearly every day. I understand where we are. I don’t think Ann needs to explain to me the nature of the situation we’re in. I’m comfortable that I understand that.

“The important thing for me is not to get overly excited and lose my composure, because that’s important that I’m there to help the players get over this and get a victory on Sunday.

“If I don’t think that there is light at the end of the tunnel or I don’t think I’m capable of turning things around then I understand that – but at this moment in time, that’s not how I feel.”

The 54-year-old former Scotland manager thinks this weekend’s Edinburgh derby brings a different sort of pressure to what Hearts have experienced at times during their winless run.

“The pressure’s different,” he added. “Our recent matches have been at home in games where we would be expected to have more of the ball and to maybe get all three points.

“That’s a slightly different pressure from being away from home and the enormity of the match. It still brings pressure and you have to be able to cope with that.”

Hearts will be without striker Conor Washington for the Easter Road encounter after he was ruled out for three months with a hamstring injury on Tuesday.

The Northern Ireland international sustained the problem in the closing stages of Saturday’s 3-2 defeat to Motherwell, and subsequent scans have revealed a tear, the club said.

Washington joins a host of Hearts players on the sidelines but the likes of Michael Smith and Steven Naismith could be ready to return on Sunday.