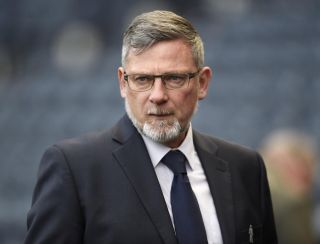 Hearts manager Craig Levein insists he is fairly confident Uche Ikpeazu will be available for the Scottish Cup final against Celtic despite suffering a hamstring scare in the 1-0 defeat against Kilmarnock.

However, he admits he may wrap the Englishman in cotton wool until the May 25 showpiece.

There was a collective intake of breath around Tynecastle on Saturday as Ikpeazu pulled up after 48 minutes and immediately indicated he could not continue, clutching his hamstring.

However, Levein revealed it was a precautionary move after the player had already informed him of some slight discomfort during the interval.

The Jambos medical staff will monitor the former Cambridge man in the coming days to ascertain whether he will be able to play any part in the remaining two Ladbrokes Premiership games of the season, but he expects Ikpeazu to be in contention for the Hampden clash.

Levein said: “Uche’s hamstring was a bit tight at half-time but he felt he could go back out and try it. He started running on it and just felt it tighten at the start of the second half.

“I had told him if he felt anything to give us the shout as there was no point in carrying on and making it worse.

“I’m quite confident we have not got any serious issue or damage there. He didn’t pull up or clutch the back of the hamstring or writhe about in agony like he normally would.

“I’m fairly confident he will be good and fully fit for the Scottish Cup final. These things tend to be minimum 10 to 14 days. We’ve tested the strength of his hamstring and it is good.”

Without Ikpeazu, Hearts went on to succumb to a last-gasp defeat against Kilmarnock, with Stuart Findlay rattling a superb strike beyond Zdenek Zlamal to secure a pivotal three points in the race for Europe.

The win sees Killie leapfrog Aberdeen into third spot going into the final two matches of the season.

Victorious boss Steve Clarke said: “Objective one was to stay in the league, which we did comfortably. Objective two was to secure back-to-back top six places.

“The third objective was to beat last year’s points tally and we’ve done that too.

“Everything I ask the players to do they keep doing. I’ve run out of objectives after the third one! I’m sure between now and seeing the lads again on Tuesday we’ll come up with another one.”