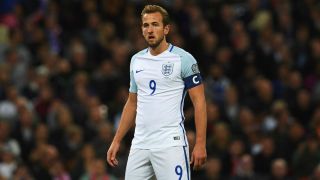 Harry Kane's elite professionalism off the pitch makes him the perfect choice as England's captain for the World Cup, according to goalkeeper Tom Heaton.

The Tottenham striker will wear the armband in Russia after earning the role ahead of the likes of Jordan Henderson and Eric Dier.

Manager Gareth Southgate praised the "outstanding personal qualities" of the 24-year-old, who has led his country on four previous occasions.

Burnley keeper Heaton, one of five players on standby for the tournament, is in favour of Kane getting the nod, praising his dedication to high standards.

"I think with Harry he's impressed me with his determination, his professionalism, his attitude, he's very driven," Heaton told Omnisport on behalf of Know The Score, a campaign to raise awareness of bowel cancer signs and symptoms.

"What he does on the pitch stands for itself, the records he's broken, the goals he's scored, but I've been really impressed with him as a man and how he goes about it and he's certainly for me a standout candidate."

Kane: “It’s a massive honour. You always dream of playing for England growing up, and to be the captain is that little bit more. To be leading the lads out is going to be special.” May 22, 2018

Kane heads to Russia as one of few certain starters under Southgate, having netted 30 goals in the Premier League this season.

Heaton views the prolific centre-forward as an "obvious" key figure in England's plans.

"If he can score some goals which I'm sure he will do it's going to give us a great shot," he said.

"Especially in international football if you can put the ball in the back of the net you're going to give yourself a great chance.

"I find international games are often tight, they're cagey, so if he can produce some of his magic it will give him a great advantage."