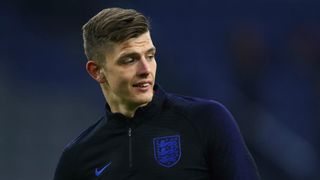 Gareth Southgate named the uncapped Pope in his 23 for Russia alongside Jack Butland and Jordan Pickford, with Heaton on standby and the experienced Joe Hart missing out altogether.

Pope's selection caps a remarkable rise from obscurity for the former Charlton Athletic shot stopper, who was second choice at Turf Moor prior to his club captain's shoulder injury in September.

The 26-year-old went on to make 35 appearances in the Premier League and Heaton, capped three times, believes his positional rival has earned a seat on the plane.

"Very much so [he has earned it]. Obviously I started the season and he came in and the job he has done has been incredible," Heaton told Omnisport on behalf of Know The Score, a campaign to raise awareness of bowel cancer signs and symptoms.

"It just shows in football you never know. It's a fantastic journey for him."

Everton man Pickford and Stoke City's Butland are expected to battle it out for a start in the opening group game against Tunisia, although Heaton says the race is wide open.

"[Southgate has] got a few options," the 32-year-old said. "I think many people have spoken over time that it's probably one of the first years in a while going into a major tournament where the number one's really not set in stone.

"It's difficult to call, it depends on what way the manager wants to go.

"There's certainly some excitement around the England team at the moment, you look at the young players that are coming through, the talent in the team. And there's a hunger as well having been involved in it for a period of time now - especially with this new manager, there's a real appetite for success."