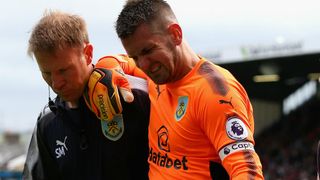 Burnley goalkeeper Tom Heaton is expected to be out for four months following shoulder surgery.

The 31-year-old suffered a dislocated shoulder after falling awkwardly during the 1-0 victory over Crystal Palace last weekend and had an operation on Wednesday.

He is now poised to be on the sidelines until January, in news that comes as a blow not only to Clarets manager Sean Dyche, who will now be without one of his most important players, but also England boss Gareth Southgate as he continues his preparations for the 2018 World Cup.

Dyche did not put a timescale for Heaton's return, but reports suggest he will be out for the rest of 2017.

"We're happy the surgery went well, but we won't rush Tom back," said Dyche ahead of Saturday's game with Liverpool.

Heaton was called up to the England squad in August for World Cup qualifiers against Slovakia and Malta, rivalling Joe Hart for the number one jersey.

But his spell out of action will likely serve as a dent to his hopes of making the travelling party for the World Cup, with Hart, Jordan Pickford and the recently returning Jack Butland all jockeying for position in Southgate's squad.

Dyche will now have to turn to one of Nick Pope, who replaced Heaton against Palace on Sunday, or Adam Legzdins, who signed in August from Championship side Birmingham City.

Burnley have also been liked with former Manchester United goalkeeper Anders Lindegaard, who is available on a free after leaving Preston North End in pre-season.