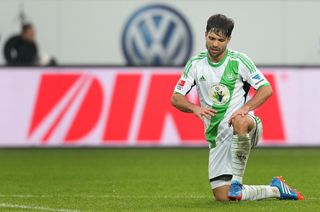 The Brazilian is contracted to the Bundesliga club until June 2014 but has continually been linked with a return to Atletico Madrid.

And with the coach seemingly cooling on the idea of offering the gifted playmaker a new deal, Diego's days at Wolfsburg appear numbered.

"We have to see if it makes sense to extend the contract of Ivica Olic, and the same with Diego," Hecking said.

"We must evaluate if he (Diego) suits the style of game that we want, or if we are basing our game to be too dependent on him alone.

"There are the economic conditions in place to sign these players again, but we want to escape the belief that Wolfsburg's players are here just for money."