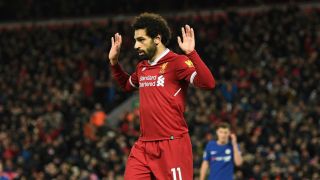 Eden Hazard illuminated the first half at Anfield with a fine performance for the Premier League champions, while Salah carried Liverpool's main attacking threat throughout an absorbing encounter.

The Egypt forward pounced to net his 15th goal of the season in the 65th minute, but Willian – one of the players who once obstructed Salah's path to the Chelsea first team – came off the bench to equalise with an overhit cross five minutes from time.

"He just keeps going, which is good for us," Henderson told BT Sport when he was asked about man-of-the-match Salah.

"It was a fantastic finish and I thought he got another late on."

Liverpool captain Henderson came in for criticism for his performance in Tuesday's 3-3 Champions League draw at Sevilla, where Jurgen Klopp's side gave up a 3-0 lead.

He reflected on a much improved performance and felt reigning Premier League champions Chelsea were fortunate to escape with a share of the spoils.

"We're disappointed, I thought we would hang on for all three points so they will probably be very, very happy with the point," Henderson added.

"It was a game between two good teams, tactically, we both had chances but I think Chelsea will be happier with the point."

Liverpool are fifth in the Premier League on 23 points, still three shy of Chelsea in third.