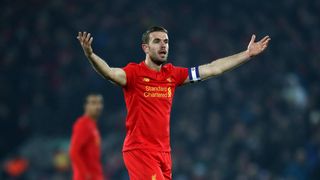 Liverpool boss Jurgen Klopp is unsure whether captain Jordan Henderson will be able to feature again this season.

England midfielder Henderson has been sidelined by a foot injury since mid-February and will again miss out when Crystal Palace visit Anfield this Sunday.

In previous weeks Klopp had expressed hope over the 26-year-old making a return but he could offer no guarantees fans will see Henderson in action again before the end of May when addressing a pre-match news conference on Thursday.

"I don't know," he said. "At this moment he cannot really train. We have to wait. If there was something else to say I would.

"We are in intense talks with different medical departments. He is already not patient anymore.

"It's not cool. He looks really healthy but he cannot play football. That's the situation at the moment."

There was better news over Henderson's international colleague, Adam Lallana, who has missed Liverpool's past four matches due to a hamstring problem.

"Adam is in a good way, back on the pitch but still with the rehab coach, so nothing has changed there," Klopp explained.

"He should be involved - not sure exactly when - in a normal training week by Wednesday or Thursday, something like that."

Klopp also has significant injury problems to ponder at centre-back, with Dejan Lovren his only fully fit senior player in the position at this stage.

Joel Matip and Lucas Leiva are nursing knocks, while Ragnar Klavan is managing a knee problem, meaning teenager Joe Gomez could be in line for his first Premier League action since September 2015.

"We have a few little things from the last game which don't make it much easier," Klopp added.

"There is a bit of a muscle problem with Joel Matip and Lucas Leiva, still a problem with Ragnar Klavan - it was a really small problem with a ligament but there still may not be enough time before Crystal Palace, so it will be interesting. But it looks good at the moment."

"Joe Gomez played on Monday for the Under-23s, played well again, and has made big steps in the last few weeks, so maybe we have to try this pair, we will see. I don't know at this moment."