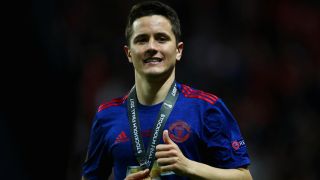 Man-of-the-match Ander Herrera dedicated the Europa League trophy to the victims of the Manchester terror attack after Manchester United saw off Ajax in Stockholm.

United ensured Champions League qualification with a 2-0 win over Ajax at Friends Arena on Wednesday, but it was a sombre mood pre- and post-match after a suicide bomber took 22 lives at Manchester Arena days earlier.

More than 100 people were also injured as fans were leaving an Ariana Grande concert on Monday.

Touched by the events so close to home, Herrera had the victims in his heart as he lifted the Europa League trophy in the Swedish city.

"We are very happy, a European trophy, you don't win it every day. I lost the final four years ago. I want to dedicate the trophy to the victims," Herrera told reporters.

"We want peace in the world, respect. We are no-one, just footballers, but we have an audience, I want to say to everyone to work together for a normal world.

"Happened in Manchester, but we have to be a united world to fight for peace. No attacks, no more of that, please."

He continued: "Yesterday [Tuesday] morning we were devastated, we were really, really sad because when you think about life and football you have no choice.

"It was difficult to train yesterday, really, really difficult for us. Manager told us only thing we can do is win it for them, that's what we've done. It's just a football game, just a trophy, but if we can help or support them with this one per cent it's enough for us."

It was the perfect ending to an otherwise gruelling and topsy-turvy season at Old Trafford, which did yield a Community Shield and EFL Cup.

Having flirted with a top-four finish, too many draws meant United ultimately were sixth after 38 Premier League matches - leaving the Europa League as their only chance to qualify for the Champions League.

"There is always motivation when you put a United shirt on. Reputation is big. Representing the biggest club in England," the former Athletic Bilbao star said.

"We know we could have done better in Premier League. To win three titles is fantastic. Game of the season, couldn't talk of good season if we had not won it. Now talking of great season. Three titles, Champions League, fans proud of us, played like a big team, very smart, against a very good team. I am very happy. I lost a final four years ago, very happy."