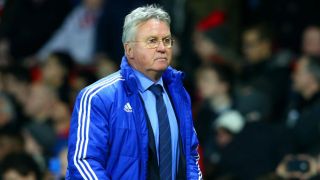 Guus Hiddink has no plans to extend his stay as Chelsea manager even if he manages to win silverware at Stamford Bridge this season.

The Dutchman took over, for the second time in his career, on an interim basis following the dismissal of Jose Mourinho last month, the Portuguese paying the price for overseeing a dreadful start to the club's Premier League title defence.

Hiddink led Chelsea to FA Cup glory in a short spell in charge in 2009 after Luiz Felipe Scolari's departure.

Since he took over in December, Chelsea have drawn two matches and defeated Crystal Palace 3-0 to stretch their unbeaten run to four.

While Chelsea's hopes of retaining the Premier League this season are slim at best, they still have the opportunity to compete for the Champions League and FA Cup.

But Hiddink is adamant his second spell in charge will be over at the end of the campaign regardless of any success Chelsea might have.

"The first is the FA Cup final and the second is the Champions League. I think we have made it very clear at the end of this then I will stop."