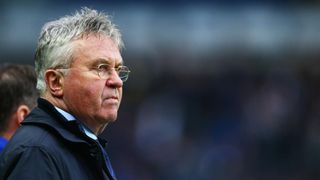 Chelsea thrashed MK Dons 5-1 in the FA Cup to set up a fifth-round showdown with Manchester City and coach Guus Hiddink revealed he had asked his players to 'go back to basics' in a bid to recapture last season's title-winning form.

An Oscar hat-trick and one apiece from Eden Hazard and Bertrand Traore saw the visitors comfortably into the next round on Sunday, while after the match veteran captain John Terry announced he would be leaving at the end of the campaign.

But Hiddink is hopeful his charges can rediscover the ingredients that made them such a formidable force last term.

"I wanted the contribution they did then [when Chelsea won the league]," the Dutchman told BBC Sport. "I asked the players: 'What did you do? Let's try to go back to what your basic skills are'.

"We are delighted. The concentration against the big teams is always high, but these games you have to be well prepared mentally.

"They got even, but we reacted very well."

Hazard stepped up to take Chelsea's penalty and Hiddink confirmed the players made the decision over who would take the kick.

"They decided themselves because we have this hierarchy of the penalties," he said.

"Oscar gave it to Eden as everyone knows he has not scored for a long time.

"Oscar is playing with a smile on his face and that's what I like with the players, when they know their obligations and they do it."

Hiddink also revealed Chelsea have no injury concerns over Brazil international midfielder Willian, who got a bang on the foot late in the match.