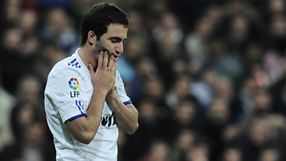 The problem in the lumbar region was identified at the beginning of December and club medical staff said then that surgery would likely sideline the 23-year-old Argentina forward for about two months.

GEAR:Save 11% on Real Madrid home shirts with Kitbag. Free delivery on orders over £50

Further tests and consultations on Tuesday showed an improvement that will probably mean a shorter recovery period than initially expected, the club said in a statement on their website without giving a timeframe.

"The persistence of pain and of the herniated disc moved experts to advise surgery as the next step," the statement added.

"The work done till now will allow for an easier surgical procedure, better post-operational results and a shorter rehabilitation period."

Higuain's injury has prompted speculation in local media that the big-spending La Liga giants could bring in another striker in the January transfer window.

Higuain has been first choice ahead of Karim Benzema under coach Jose Mourinho, who said last month that having only the France striker available would make things difficult.

The return of Kaka from knee surgery in Monday's La Liga win at Getafe means Mourinho has the option of deploying top scorer Cristiano Ronaldo at centre forward, with the Brazil playmaker just behind and Mesut Ozil and Angel Di Maria providing width.

Real said a decision would be taken within 48 hours on where Higuain's operation will take place and who will perform it.