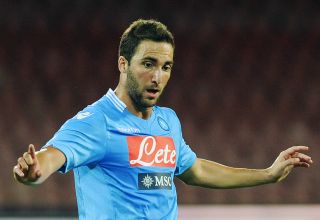 The former Real Madrid forward moved to the Stadio San Paolo in July for a fee believed to be in the region of €40million, with the 25-year-old intent on playing regular football.

His arrival in Naples came after the departure of Edinson Cavani to Paris Saint-Germain, although Higuain is not focused on filling the void left by the Uruguayan.

Instead, he is more interested in replicating the feats of his compatriot Maradona, who helped Napoli to two Serie A titles in his seven years with the club from 1984-1991.

"He (Cavani) has gone away and will be remembered for a lot of goals scored," Higuain told La Gazzetta dello Sport.

"I am here and I want to get into the history of the club as Maradona, because my only goal is to win."

Higuain also feels Napoli can rival current champions Juventus and challenge for the Serie A title this season.

"We must believe in the Scudetto, we are competitive and we can dream despite the league (being) very difficult," he added.

"Juve has made clear their intentions largely by winning the Super Cup. Milan is also in good shape.

"Overall, though, I am convinced that if we do things right, we can win."

Rafael Benitez's men get their Serie A campaign under way on Sunday when they host Bologna.