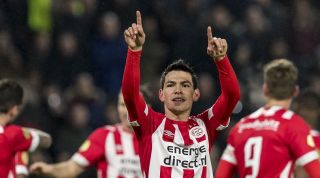 The PSV winger has enjoyed another excellent season for the Dutch outfit, scoring 17 goals as Mark van Bommel’s side battle for the Eredivisie title.

The Mexico international has been linked with a move to the Red Devils on several occasions in recent years.

But Lozano is reportedly on his way to Napoli after agreeing a five-year deal with the Serie A side.

The Partenopei will pay PSV £34m for the former Pachuca forward, who impressed for Mexico at the 2018 World Cup.