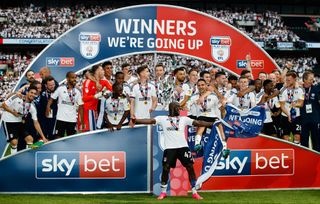 Almost two-thirds of clubs promoted to the top flight via the play-offs since the introduction of one-off finals in 1990 have gone straight back down.

Derby, who face Aston Villa in Monday’s Championship play-off final, know very well how hard it can be to adjust after promotion via this route.

They posted the all-time lowest Premier League points total of just 11 following their play-off success in 2007.

Here Press Association Sport looks at the survival rate for teams promoted via the play-offs.

Second tier to top flight – the toughest step of all

In all, 18 of the 29 clubs to come into the First Division or Premier League via the play-offs since 1990 have gone straight back down.

Four of the last five teams promoted this way – QPR, Norwich, Hull and Fulham – have failed to survive, with only Huddersfield bucking that trend by finishing 16th in 2017-18.

Crystal Palace have been promoted to the top flight via the play-offs on three occasions but twice went straight back down (1997-98 and 2004-05), while Watford were relegated on both occasions when they were promoted in this way.

West Ham hold the distinction as the only team to have twice been promoted and survived each of the first seasons up.

Thriving rather than surviving

Play-off success can be the springboard for greater things – Manchester City followed up promotion from the third tier in 1999 with winning instant promotion to the Premier League the season after.

Blackburn finished fourth in the Premier League’s inaugural season – still the best-ever placing for a side immediately after promotion via the second tier play-offs.

Cambridge followed up play-off success in 1989-90 by winning the Third Division title in 1991, while more recently Southend won the League One title in 2006 after being promoted via the play-offs the season before.

Just three of the 29 teams promoted to the second tier from the third via the play-offs since 1990 have suffered instant relegation – Burnley in 1995, Yeovil in 2014 and Rotherham in the season just ended.

The jump from the fourth tier to the third is only slightly more perilous according to the data, with five of the 29 teams promoted via the play-offs going straight back down. The unfortunate ones were Torquay (1992), Scunthorpe (2000), Cheltenham (2003), Gillingham (2010) and Dagenham (2011).